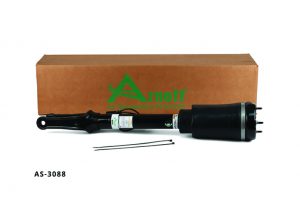 • Arnott’s strut features a premium Eibach damper tuned for an OE-like ride and a cross-hatch, multi-ply ContiTech air sleeve
• Strut is designed, assembled and tested in the U.S.

Arnott’s new, not remanufactured, Mercedes-Benz strut, AS-3088, features a premium Eibach® damper tuned to provide an OE-like ride. The strut is assembled in the U.S. with Tier 1 components including a new multi-ply, cross-hatch air sleeve from ContiTech with a steel top mount, O-rings, bump stop, heavy-duty crimping rings, and a 4mm air line fitting. The new strut does not require a core deposit or handling and is backed by Arnott’s industry-leading warranty.