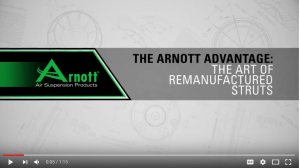 Arnott has been remanufacturing air suspension struts for luxury cars, pick-up truck and SUVs since 1989. Arnott started remanufacturing used air suspension parts to keep them from filling up our landfills while providing the highest-quality refurbished products. In that time, Arnott has processed millions of original equipment cores identifying the most common failure points. Arnott engineers then strive to improve upon the original design to provide customers with a high-quality strut that works seamlessly with the vehicle’s auto leveling and active damping functionality and is less expensive.

Arnott remanufactured struts are inspected, steam cleaned, and then spin blasted to bare metal before the shock portion is recharged with new high performance shock oil. Worn shock components such as the piston and rod guides, as well as the seal pack, are replaced before being repainted with corrosion inhibiting paint and re-built with a new bump stop, premium brand air bladder, and other tier one components. Watch this video to learn more about the art behind properly remanufacturing air suspension struts. Don’t settle for less.